PANCHAMAYAKOSHA – THE FIVE LEVELS OF BEING

Yoga philosophy describes the body as composed of 5 sheaths, bodies or levels of being. These are the five koshas (pancha = 5, kosha = sheath). The word maya can also mean sheath or veil. Thus the panchamayakosha are the 5 sheaths which veil our true being.

Sometimes they are described as being like Russian dolls, starting from the innermost, as the most dense and material and the outer layers becoming progressively more immaterial and subtle – or the reverse, with our innermost body at the subtlest level. However, only the physical body exists in three dimensional space, so this model cannot adequately encompass all the koshas. 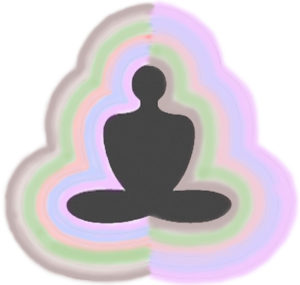 Each kosha represents one of the various, interrelated levels of our human experience; physical body, vitality, thoughts and emotions, intuition and transcendence.

When we are suffering dis- ease in the world, this can manifest predominantly on one, several or even all levels of being; e.g. as physical pain and dysfunction, fatigue, mental / emotional disturbance, lack of meaning and purpose, loss of joy and happiness. The appeal of yoga in the modern world is that it encompasses the physical and also takes us beyond. Thus in yoga therapy, there is a range of techniques, which operate at the different levels of being. A predominantly physical practice brings some relief to a person who is suffering from chronic worry and anxiety. For a while, it releases physical tension, improves vitality and shifts mental focus. However, a practice which includes tools to calm the repetitive thought cycle and help develop intuition and insight, is more likely to enable their deeper wisdom to provide lasting solutions to the worries.

Although practices are listed below under the different koshas, none of them only works at one level. In addition, the effects can be altered according to the style of the practice. Holding a standing asana, while exploring subtle adjustments, balances and strengthens the physical structure, disperses sluggishness, builds prana and also develops focus and will power. While a supported, restorative asana, with attention on breathing, helps to calm and relax the body, replenish depleted energy levels and eventually quieten the mind.

This is the tangible, visible, 3 dimensional physical level of being – the musculo-skeletal body structure with the internal organ systems. Physical sensation such as pain and stiffness are symptoms of dis-ease at this level. Physical interventions directly affect the annamaya kosha, These include: movement, exercise, asanas, massage / bodywork, diet, medicines and surgery.

In yoga therapy physical practices would be primarily exercises, joint movements, asanas, breathing exercises to improve breathing mechanics and kriyas (internal cleansing). However, any physical exercise has an immediate effect on energy and thus the pranic body, which in turn affects the state of mind. The koshas interweave, so all practices will have some repercussions through all the levels.

Active asanas are those which require energy input and, when done judiciously, build strength and energy. These can be static (held) or dynamic (moving), the latter may be fast or slow, strenuous or gentle. 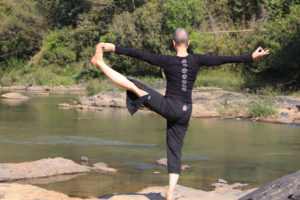 Restorative asanas are passive poses and often involve the use of props for support. They enable the student to relax more deeply, focus on particular areas of the body and release chronic tension in the deep muscle layers. They also helps to free the breathing mechanism. 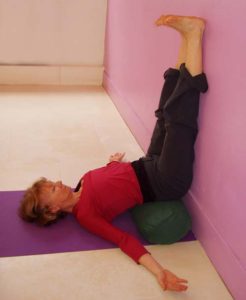 Assisted asanas are when the teacher / therapist physically assists or supports the student in the pose.

Parvrtta Supta Padangusthasana
In general the purpose of asana practices is to:

N.B. A correct asana practice builds energy in the body and leaves the mind calm, an incorrect practice will tend to drain energy and can agitate the mind.

The practice can be challenging, but without strain. This can be difficult for inexperienced practitioners to determine and goes against many other forms of physical training. During the practice one should be able to maintain a normal breathing rhythm through the nose. Afterwards one should feel both relaxed and energised for several hours. Straining can cause an initial feeling of euphoria (endorphin release) followed by fatigue or exhaustion. This indicates a drain in energy. An over strenuous practice can agitate the mind, making it harder to mentally relax and/or do meditation.

Traditionally the most beneficial time to practise asanas is in the early morning, on an empty stomach, after evacuating the bowels. However, some people may need to eat something very light, such as a small portion of fruit or juice no less than 30 minutes before.

These are best done slowly and rhythmically in time to the breathing and can easily be adapted and varied to the needs of different individuals.

These stimulate natural internal cleansing processes and are useful to assist apana (removal of waste).

They also help tone and relax the internal organ muscles.

"if you don't take care of your body, you'll have no where to live!"
- Unknown

Prana is the vital energy also known in Chinese traditional philosophy/ medicine as qi /chi and in the Japanese system as ki (as in Reiki).

This vital energy is thought to flow in channels (nadis / meridians) which permeate the whole structure of the body and extend beyond it to form the aura. They intersect at strategic points known as chakras, some of which seem correspond to the nerve plexuses.

Symptoms of lack of prana include breathing problems, poor vitality, lustreless complexion and eyes, chronic fatigue and energy swings from one extreme to the other.

In addition prana takes different forms in the body as the Prana Vayus. These govern different areas, functions and directions of flow and approximately correlate with the forms or Transformations of Qi in Chinese medicine.

Energy treatments such as acupuncture, shiatsu, reiki and other practices such as tai chi and qi gong target the pranic level, while obviously also working on other levels.

Pranayama (control of the vital energy through breathing techniques)

This is the yoga practice that most obviously targets the level of the pranamaya kosha.

It's purpose is to:
- increase efficiency of the respiratory mechanism and lung capacity
- help build up energy levels
- teach more efficient use of energy, lessening extreme, unnecessary fluctuations
- balance the circulation of prana, dispersing blocks and smoothing agitation and turbulence
- calm the mind and emotions
- prepare for meditation

As with the asanas, it is essential not to strain during the pranayama practice, to build the practice gradually and monitor the effects. A forced practice can have the opposite of the desired effects and aggravate symptoms.

Other techniques:
- Kriyas, which cleanse the respiratory system and enable prana to flow and circulate more efficiently through the organs
- Guided visualisations of the body as an energetic process
- Developing awareness of prana (e.g. observe between pawanmuktasana sequences) also helps promote healing
- Meditation practices, such as Vipassana help fine tune the awareness of subtle sensations
- Nada yoga, using sound to create vibration and resonance within the body
- Chanting

The manas is the thinking, reasoning mind, coupled with the emotions (the physiological responses to our thoughts). Habitual thought patterns and emotions are both conscious and unconscious and are greatly influenced by early conditioning.

Stress originates from the manas, repetitive cycles of thinking and worrying about the past or the future. This is considered to be at the root of all dis-ease. Our mental / emotional state affects our susceptibility to infection and how we react to injury and illness! All practices (including asanas) which calm and focus the mind (dharana) and keep it anchored in the present moment, in a state of relaxed concentration (dhyana), work at the level of the manomaya kosha.

(Counselling, Psychotherapy, Hypnosis and NLP also work at this level).

Specific practices for the manas:
- Formulating positive goals / intention for a practice
- Trigger words, which trigger a positive internal response and can be repeated in the mind (often combined with breathing) like a mantra
- Counting breaths to keep the mind occupied
- Using a mantra to calm and focus the mind
- Mindfulness meditation
- Visualisation
- Chanting
- Any activity which quietens the thinking mind

"I have lived through many terrible experiences,
and some of them actually happened."
- Mark Twain

The vijnanamaya kosha houses the Buddhi, the level of consciousness beyond thought, from which intuition, inspiration, discrimination, insight and wisdom arise. The 'witness' operates at this level.

Excessive attachment to the 'rational' mind, inability to trust in intuition and/or being stuck in dis-empowering, conditioned beliefs, hinder the guidance from the vijnanamaya kosha.

Spiritual malaise, deep dissatisfaction, unhappiness, a sense of pointlessness and depression can occur when access to the vijnanmaya kosha is hindered.

(Psychotherapy, counselling, hypnotherapy, Time Line and dream therapy are examples of other approaches, which can also help to access the vijnanmaya kosha)

Practices to access and develop the vijnanamaya kosha:
- 'Yogic' counselling (using concepts of yoga philosophy to address unhelpful beliefs and open the way to a positive shift in perspective)
- Yoga nidra and sankalpa
- Meditation
- Mindfulness (witnessing)
- Jnana yoga (direct enquiry into the true nature of being)
- All Yamas and Niyamas (intelligent self care, without force or judgement, as a foundation for spiritual development). More specifically:
- Svadhyaya (spiritual study)
- Pratyahara (seeking beyond gratification of the senses, desire and aversion)
- Ishwara pranidhana (surrender to a greater power, beyond the ego, 'going with the flow')

Bliss arises when we are released from of the sense of the self as a separate individual ego and/or have the experience of oneness.

This can occur spontaneously in many different circumstances, often in extreme emotional situations, when the mind chatter simply stops, the veil of Maya lifts and it is seen that there is no individual, separate self; only pure consciousness, oneness, whose true nature is joy and love. Most people have such glimpses every now and then, although as soon as it is recognised, the mind and ego usually jump in to claim the experience and the glimpse is over.

Some practices which can help awaken awareness of the anandamaya kosha:
- Deep relaxation
- Meditation
- Bhakti yoga (devotional practice)
- Karma yoga (seeing the other as self through selfless service)
- Any activity (often creative activities) when one is so completely absorbed that the separate self disappears and there is just the activity with no one 'doing' it.